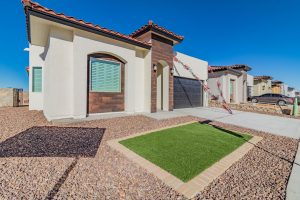 Here at Santana Homes, we use centuries of home building knowledge and combine that with state-of-the-art 3D technology to produce affordable, durable homes for you and your family. We wanted to take a look back at the history of home building in the U.S, to show how we used years of trial and error to produce the best homes in El Paso.

Homes of the Early Settler

The first colony was founded in 1607, in Jamestown, Virginia by settlers escaping the harsh realities of European life. The Pilgrims followed closely behind in 1620, happy to arrive in a land where they could practice their faith and cultural beliefs without fear of persecution. They faced a great deal of hardship in all aspects of life, including their homes. Early colonial homes were often called “wattle and daub” houses, meaning they were made of poor local wood and holes often covered with dry mud and clay that could be found in the area. The roofs were made of thatched grass, which wasn’t great for stormy weather.

American homes go significantly better a couple centuries removed from the first settlers, and were influenced largely by the country of origin of the people making the houses. For example, German colonial homes were impressive stone creations, often having clay roofing and several windows to let in natural light. The Dutch colonial homes were similar to the German style homes, and a few examples can still be found in New York today. The Spanish colonial home—which provided inspiration for much of El Paso, including us—was characterized by a stucco exterior, crushed shell and stone flooring, and beautiful artistry. Much of the Spanish explorer influence can be seen well throughout the El Paso area. The late 1800s also saw the use of electricity in homes, which paved the way for lights and other appliances to become a part of the typical home.

The 20th century was full of ups and downs for Americans—WWI and the Roaring 20’s brought America to the pinnacle of economic growth and international power, but the Great Depression destroyed the way of life that many people became accustomed to in the decades prior. Home builders in this time period had to act fast, and began making homes cheaper and cheaper as less people had money for a new home. Homes in the Great Depression were very basic, one story homes made of cheap materials so even those hit hard by the recession could afford a home. As the depression waned, homes became more ornate and stylish again, and the Cape Cod house became a popular choice for home builders. Electricity remained a vital part of any home, especially as new appliances were invented late in the decade to make home life easier. Other improvements like aluminum siding and modern window paneling helped to tamper temperature fluctuations and protect the home.

If you’re looking to get an affordable, durable and luxurious home that is inspired by centuries of home building, a Santana Home is the best way to check off all the boxes on your list. Our homes can have a stone veneer exterior like the sturdy Dutch and German Colonial homes of the 1600s or the 1700s, or maybe a synthetic stucco finish that has served homes in the Southwest well for centuries. Our EnergyStar certification means you’ll save money on bills, and our dual paned windows will keep the cool air in so you can escape that El Paso heat. Our 3D technology and our warranties will ensure that your home will be the home of the future.

Let’s get in touch